What is a coral reef

Coral reefs are the masses of limestone and dolomite accumulated by lime secreting organisms known as Coral polyps. An individual coral is known as a polyp. These polyps live in a symbiotic relationship with host Zooxanthellae. Moreover, the zooxanthellae give its colour to the corals. Also, they prepare their food through photosynthesis and gives out oxygen and other important nutrients to the polyps. As the coral dies, the remains of the shells get deposited and the new corals start attaching to the remains of earlier corals.

This cycle of dying and deposition continues over the millions of years leading to the accumulation of coral layers. They usually attach themselves either along an island or shore.

Coral reefs as an ecosystem

Fringing reefs are the narrow belt of reef along the continental shelves. They grow directly from the shore. Also, they are the most common coral formation among all the reefs. Fringing reefs grow from the deep-sea bottom with seaward sloping.

Barrier reefs are the largest and the most extensive of all the reef formation. They have formed in the sea nearly 1 km to 15 km away from the shores. Moreover, these reefs grow from the deep bottom and lie at a distance away from the coast. They are characterised by the lagoons having a depth of 20 to 40 fathoms. Hence, these reefs are navigable easily.

Atolls are circular or semi-circular reefs resembling like a horseshoe. Generally, they thrive either around the islands or a submerged plateau. Atolls are marked by a shallow lagoon of open water. Mainly, many open channels provide fresh and colder water for the lagoons. Most importantly, atolls are formed at the top of submarine mountains which are the remnants of volcanoes.

Where coral reefs are found?

Coral polyps are mostly found in the tropical regions between Tropica of cancer and Tropic of Capricorn. Generally, most of the reefs are formed on the eastern shores of the continents. However, there are some marginal belts of corals between the subtropical regions.

Why coral reefs are important?

1. Coral reefs are the natural protective barrier against the strong tropical storms.
2. They are the home to countless marine animals.
3. On average, 400 million people depend on the fisheries of corals for food and income.
4. They also attract tourism in many places.
5. The carbonates of calcium produced by corals are used for the manufacturing of cement.

Various factors are responsible for the death or bleaching of coral reefs. These factors are either natural or anthropogenic (man-induced), or a combination of both the factors. However, the following are the main causes of bleaching.
1. Chemical pollution (pesticides).
2. Industrial pollution.
3. Over-exploitation and overfishing.
4. Nutrient overload (Eutrophication)
5. Increased sedimentation.
6. Flooding.
7. ENSO ( Elnino southern oscillation)
8. Freshwater dilution due to high precipitation or water runoff.
9. Photosynthetically active radiation (PAR- 400nm- 700nm).
10. Ultraviolet radiation (280nm-400nm).
11. Extreme low or high tides.
12. Extreme low or high temperatures.

How coral reefs are formed?

There are two theories regarding the formation of coral reefs as following.
1. The subsidence theory of Charles Darwin.
2. Glacial control theory of Daly.
Darwin’s subsidence theory– According to Charles Darwin, the platforms on which the corals grow was unstable and sinking gradually. Consequently, the living corals would find themselves in the deeper water. Hence, these coral polyps started growing upward and outward and trying to balance the subsidence of the land. On the other hand, the growth of the fringing reef would result in the formation of the barrier reefs. Ultimately, the barrier reef transforms into atoll due to complete subsidence of land.
Daly’s Glacial control theory– As per Daly’s control theory, during the Pleistocene period the formation of the ice caps lowered the ocean level by 60-70m below the present sea level. Moreover, the lowered temperature during this age caused the death of many coral polyps. In the meanwhile, the new sea level was responsible for the formation of cut platforms along the coasts of continents. But when the ice age came to an end, the temperature started increasing again, corals began to grow on these platforms and rose upward. Again all the types of reefs got formed on the pre-existing platforms. Thus fringing reefs and barrier reefs were built on the narrow and broad platforms respectively.

What is coral bleaching? 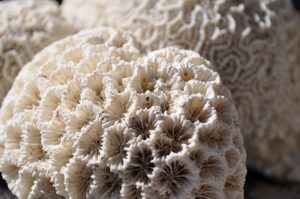 Coral bleaching occurs when coral polyps lose their symbiotic relationship with Zooxanthellae (a type of algae). This lead to the paling of corals when the density of zooxanthellae starts declining. Besides, they lose 60% to 90% of their zooxanthellae.

In fact, a combination of both the theories can provide the better explanation of the reef formation.

Despite having a large coastline, India has only a few coral reef areas. The Gangetic delta of India and Bangladesh are devoid of corals due to heavy siltation and outpour of huge freshwater. On the other hand, the heavy monsoonal rainfall also repels the formation of corals.

However, the following are the regions of India have coral reefs.

These islands are located in the Bay of Bengal between 6⁰-14⁰N latitude. All the islands of the Andaman and Nicobar marked by well-developed fringing reefs. According to a research conducted by the society of Andaman and Nicobar ecology, there has been a mass coral bleaching in the 1998 around the reefs of Andaman. On the other, 30% to 70% of Nicobar’s reef bleached during the same period.

The gulf of Mannar also has corals developed around a chain of 21 islands between Tuticorin and Rameshwaram.

It is the northernmost point of coral formation in India. These reefs are mostly of fringing type.

Geographically, it lies between 8⁰N- 12⁰3ꞌN latitude having a coral formation built upon the Laccadive-Chagos submarine ridge.

Other marginal regions of coral formation

1 thought on “Are coral reefs dying really around the world?”