Difference between climate and weather

Elements of weather and climate

The elements of both the weather and climate are same as following.

The climate of India

Based on the monthly atmospheric conditions, a year can be divided into many seasons. For instance, summer season, winter season, autumn season and rainy season. Broadly speaking, the climate of India can be described as tropical monsoon type. However, there are some regional variations in the types of climate in India due to various factors.

Factors affecting the climate of India

The following are the most important factors which affect the climate of India.

How latitude affects the climate of India?

Latitude– The latitudinal extent of India is between 8⁰4ꞌN to 37⁰6ꞌN. The Tropic of Cancer divides India into two latitudinal halves. Towards the south of Tropic of Cancer, the region experiences high temperature, having a tropical climate. Since this region is near to the equator, it receives maximum insolation which led to high precipitation. On the other hand, the regions towards the north of Tropic of cancer experience the sub-tropical or temperate climate. Also, they experience the extreme climate with high daily and annual range of temperature as they are away from the Equator.

Read More: What are longitude and Latitude?

Read a complete article on the latitude and longitude with the help of maps and diagrams at the above link.

How Himalayas influence the climate of India?

The Himalayan mountains act as a great barrier and have a significant influence on the climate in India. They help in the genesis of summer and winter monsoon. Also, their orientation guides the summer monsoon winds to cause rainfall along the Gangetic plains. Apart from these, they protect the sub-continent from the icy-cold winds of Siberia.

Read a complete article on Himalayan mountains with the help of maps, charts and diagrams at the link above.

The effect of distribution of Land and water on Indian Climate

Geographically, India is surrounded by the Indian Ocean on the three sides and the Great Himalayan mountains in the north. As water-bodies are mobile, they distribute the heat horizontally. The clouds formed above the water-bodies reflect the majority of the heat. Also, about 90% of heat is lost due to evaporation above the water-bodies. All these factors produce the moderating effect on the water-bodies and determine the climate of a region. On the other hand, the heat in the lands get trapped between 2 to 3 feet of thickness and predominate the continentality.

How distance from the sea affects the climate in India?

Generally, the climate of the coastal regions has a moderating effect. While the regions which are far from the water-bodies has an extreme climate. For instance, Punjab, Delhi and Rajasthan experience extreme climate.

How altitude affects the Indian climate?

It is a well-known fact that temperature decreases with height. Therefore, the places located in the mountainous regions are cooler than the plains. That is why the places at the same latitude may have different climatic conditions because of different altitude.

How relief or physiography influences the Indian climate?

The physiography of India is also one of the most important factors which affect the temperature, air pressure, direction and speed of wind and precipitation of a place. For instance, the Western slope of Western Ghats receives heavy precipitation of over 250cm particularly between 10⁰ N to 20⁰ N latitude. The Western Ghats act as a wall and force the moisture-laden southwest monsoon to ascend and cause heavy rainfall.

According to the Indian Metrological Department (IMD), the climate in India can be classified under four seasons namely, summer or pre-monsoonal season, monsoon season, post-monsoon season and winter season. Out of these four seasons, monsoon plays a vital role in the climatic condition of India.

The winter season in India

During the winter season, the northeast trade winds prevail over the entire country. As they blow from land to sea, the dry season prevails in most of the parts of India. However, Tamil Nadu receives some rainfall during this season. Also, the northern plains of India are marked by Cyclonic disturbances from the west and the north-west. Economically, these cyclonic disturbances play a vital role in the cultivation of Rabi crops. Geographically, Peninsular India does not have a well-defined cold season as it enjoys the moderating effect of the sea.

The Summer or Pre-monsoon season in India

During the summer season, the global heat belt shifts towards the north as the sun also shifts towards the same direction. In March, the highest temperature recorded on the Deccan Plateau is about 38⁰C. While the temperature in both Gujarat and Madhya Pradesh in April is about 42⁰C. In general, the hottest months of northern India are May and June. The summers are characterised with high temperature and low humidity. Due to the high temperature, the Indian mainland experience heat waves. The March and April are the warmest months of Southern India whereas, northern India experiences Highest temperature in the May and June months.

Also, the summer season in India is characterised by Loo. These are the dry, hot and strong winds blowing during the day time over the northern and north-western states of India. In West Bengal, storms with torrential downpour are common which are known as Kaal Baisakhi. The coastal states of India enjoy the moderating effect of water bodies whereas, the temperature in the Thar desert may reach up to 50⁰ C. Most of the heat waves develop over Punjab, Haryana, Rajasthan, Uttar Pradesh and Bihar. Sometimes these heatwaves cause severe loss to both lives and properties. For instance, many people in Gaya in Bihar were killed due to heatwaves in 2019.

The Monsoon season in India

In meteorological terms, Monsoon connotes the seasonal reversal of winds from one season to another. The word monsoon has been derived from the Arabic word ‘Mausam’ which means seasons. The advancing monsoon arrives in India in the first week of June in Kerala. The advancing monsoon is also known as Rainy season as it causes huge rainfall. Also, it has the potential to change the entire weather conditions of India. On the other hand, Retreating monsoon is the condition when the high-pressure system replaces the low-pressure system developed over the northern plains. It is also known as Post-Monsoon season.

The origin of monsoon

The origin of monsoon can be broadly categorised under two categories as following.

According to the thermal concept, propounded by Sir Edmund Halley, the monsoon is the product of differential seasonal heating of continents and oceanic areas.

Winter Monsoon according to thermal concept

According to the thermal concept of Halley, the mechanism of monsoon is based on the concept of land and sea breeze. During winter, the Asiatic landmass cools rapidly than the surrounding oceans resulting in the formation of high-pressure centre over the landmass. Consequently, a low-pressure centre exists over the adjacent oceans. Thus, the establishment of pressure gradient from land to the sea causes an outflow of air from the continental landmass towards the adjacent oceans which causes winter monsoon season.

Summer Monsoon according to thermal concept

During the summer monsoon, the distribution of temperature and pressure reverses. Now a low-pressure centre exists over the landmass due to heating. Consequently, the pressure over the adjacent ocean increases which led to the establishment of sea to land pressure-gradient. The warm and moist air moving from the sea towards the land yields high precipitation. Thus, it is known as Summer monsoon season.

Summer monsoon according to dynamic concept

At the time of summer solstice (June 21), sunshine vertically over the Tropic of Cancer. The NITC extends up to 30⁰N latitude and covers south and south-east Asia. Consequently, the equatorial westerlies establish over these areas and they become south-west monsoon or summer monsoon.

Winter Monsoon according to dynamic concept

However, According to recent views, there are various factors which are responsible for the origin of Monsoon.

FAQs: the climate of India and Indian monsoon

What are the factors responsible for the mechanism of monsoon in India? 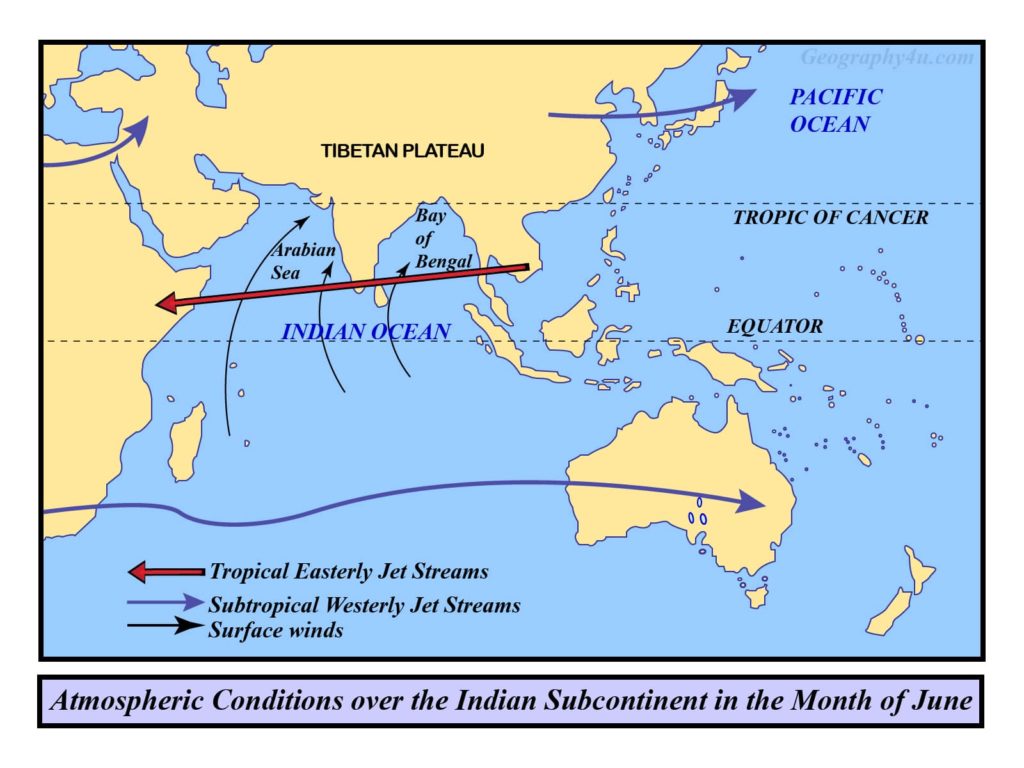 The following are the factors responsible for the mechanism of monsoon in India.
1. The differential heating and cooling of landmass and water bodies.
2. The shifting of Inter-Tropical Convergence Zone (ITCZ) during summer. The ITCZ is a broad trough of low pressure in equatorial latitudes.
3. Formation of a high-pressure area over the east of Madagascar (Somali Jet streams).
4. The uneven heating of Tibetan Plateau.
5. The presence of Westerly jet streams and Tropical easterly jet streams over the Himalayas and Indian Peninsula respectively.
(Read a complete article on Jet streams at Geography4u/jet streams)

What is the role of Tibet Plateau in Indian monsoon? 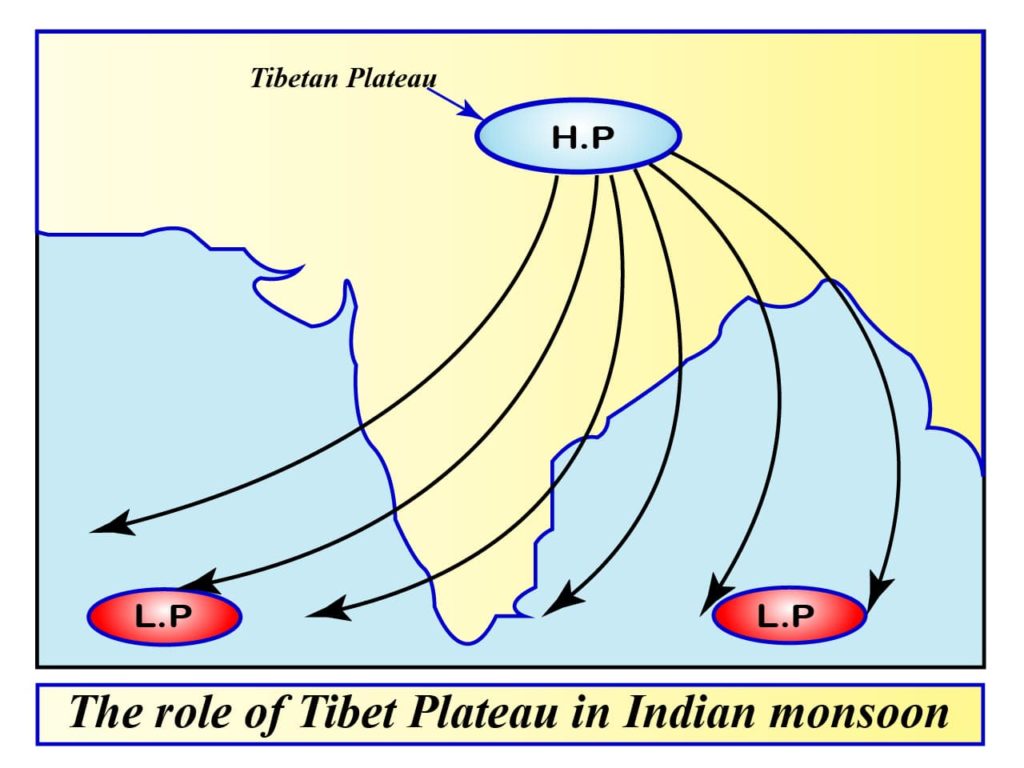 The Tibetan Plateau affects the Indian monsoon by acting as a mechanical barrier and a high-level heat source. Due to its height, it receives more insolation than the surrounding area. As a result, it acts as a heat source during the summer. Consequently, a warm-core anticyclone is formed over the Indian Plateau during the monsoon summer. The wind direction due to this anticyclone is from east to west, blowing in the mid-Troposphere are called the Tropical Easterly Jet stream. There is a direct relationship between the intensity of tropical jets and the intensity of south-west monsoon. That is why the higher the intensity of Tropical jetstreams, stronger would be the impact of south-west monsoon.

The relief or topographic barrier goes a long way in determining the pattern of rainfall in India. For instance, the area lying on the windward side receive most of the precipitation while the leeward side receives a little rainfall. Following the same trend, Western Ghats receives high precipitation while the Aravalis (parallel to southwest monsoon winds) receive less rainfall.

After striking the Malabar coast, the southwest monsoon divides into two streams as following.

The Arabian sea branch of south-west monsoon divides into three different streams. The first stream of this branch strikes perpendicularly on the Western Ghats between 10⁰N to 20⁰N and cause heavy rainfall of over 250cm. For instance, both the Mumbai and Khandala receive the rainfall of around 190cm and 450cm respectively while the Pune, lying on the leeward side receive the rainfall of about 50cm.

This branch divides into two different streams. The first stream reaches the Meghalaya after crossing the Ganga-Brahmaputra delta. The second stream of Bay of Bengal blows along the foothills of Himalaya and cause high rainfall in the Indo-Gangetic plains. Generally, there is a declining trend in the rainfall from the east to west direction.

1 thought on “The climate of India with important facts”