In this article, I will discuss the physiographic division of India, the northern plains of India, the Peninsular Plateau, the coastal plains of India. Also, the Indian desert, and the northern and north-eastern mountains of India. In political terms, the relationship between India and its neighbouring countries. With the help of diagrams, maps and charts you can easily understand the central ideal of this topic. Also, it very important topic for the examination perspective like the entrance exams of Upsc, Bpsc and other state exams.

India has one of the oldest and great civilizations of the world. Geographically, it extends from Kashmir in the north to the Kanniyakumari in the south and Arunachal Pradesh in the east to Gujarat in the west. Globally India stands at 10th position and 4th position in Asia in plant diversity. Also, it is the 7th largest country in the world. In terms of population, it stands at 2nd. However, it has been predicted that India will surpass China in 2027 in terms of population.

The total geographical area of India is about 3287263km2 and accounts for 2.4% of the world’s land surface area. Its latitudinal and longitudinal extent is 8⁰4ꞌN to 37⁰6ꞌN to 68⁰7ꞌE and 92⁰25ꞌE respectively.

Based on the outcome of structure, process and the stage of development, India can be divided into the following physiographic divisions.

The Northern and North-Eastern mountains

They mainly consist of the mountain ranges of the Himalayas and the north-eastern hills. The Himalayas has three parallel ranges which are separated by deep valleys. Also, it is one of the most complex mountain systems in the world. Some of the highest peaks are also found in the Himalayan regions like Kangchenjunga, etc.

The Northern plains of India

The northern plains of India are aggradation plains formed by the depositional work of rivers. They are the largest alluvial tract of the world extending 3200km from the mouth of Ganga to Indus. Approximately, they are 240 to 320 km in width. Geologically, the northern plains of India are formed by the 3 major rivers, namely, Ganga, Indus and Brahmaputra. According to recent views, the great plains represents the filling of the foredeep warped down between the advancing Peninsular block and the Himalayas. These plains are divided into three zones from the north to the south namely, the Bhabar, the Tarai and the alluvial plains. Also, the alluvial plains can be further divided into Khadar and the Bhangar.

The Bhabar is the narrow belt of 8 to 16Km wide, extending in the east-west direction along the Shiwalik foothills. It mainly consists of gravel and unsorted sediments deposited by the rivers descending from foothills of the Himalayas in the form of alluvial fans. Due to the high porosity of the pebbles in these regions, most of the streams sink and flow underground. The bhabar belt is comparatively narrower in the east and wider in the west.

It is a belt of 15 to 30km in width, having marshy tract to the south of bhabar belt. Due to improper drainage and gentle slope, marshy lands and swampy conditions are the common features in this belt. However, this region is marked by thick forests and high density of both flora and fauna. The Tarai belt is more common in the eastern part than the western part due to higher amount of rainfall.

The Old and New alluvial plains- Bhangar and Khadar

The south of Tarai belt lies a belt consisting of both the old and new alluvial deposits known as the Bhangar and Khadar respectively. The Bhangar represents the uplands that lie above the flood plains. It consists of old alluvial deposits of the middle Pleistocene age. Also, it has a calcareous nodules called kankars. On the other hand, the khadar is younger alluvium, having flood plains. Both the khadar and bhangra are marked by sandbars, meanders, ox-bow lakes and braided channels. Most of these regions are subjected to both sporadic floods and shifting of river courses.

It is an extension of khadar plains in the lower reaches of Ganga which is marked by muddy and marshy region.

Read a complete article on the major soil types in India at the above link.

The peninsular plateau is like an inverted triangle, which is marked off from the plains of Ganga and Indus by a mass of mountains and hills. The Vindhyas act as a formidable barrier between the peninsular plateau and the northern plains. The outer extent of peninsular plateau constitutes Delhi ridge in the northwest, the Rajmahal Hills in the east, Gir range in the west and the Cardamom Hills in the south. Also, it is extended towards the northeast in the form of Shillong and Karbi-Anglong plateau. There are some prominent plateaus in the eastern and northern side of peninsular India. For instance, the Hazaribagh plateau, the Palamu plateau, the Ranchi plateau, the Malwa plateau, the Coimbatore plateau, the Karnataka plateau, etc. It is one of the most stable and ancient landmasses of India, having general elevation from the west to the east. Based on the relief features, it can be divided into three broad groups.

Geographically, the Deccan plateau is surrounded by the Western Ghats in the west, the Eastern Ghats in the east and the Satpura, Maikal range and Mahadeo Hills in the north. Locally, the Western Ghats are famous with different names. For instance, Sahyadri in Maharashtra, Nilgiri Hills in Karnataka and Tamil Nadu, and Anaimudai Hills and Cardamom Hills in Kerala. The average elevation of Deccan Plateau is about 1500m. Its height increases from the north to the south.

Geographically, the central highlands are surrounded by Aravali range in the west. Its general elevation is about 700m to 1000m. However, the mountains in this region are not continuous. Geologically, this region is predominated by Metamorphic rocks like Marble, Slate and Gneiss etc. Also, the Central highlands are extended in the east in the form of Rajmahal hills.

The north-eastern plateau is an extension of Peninsular India. It has been believed that during the origin of Himalayas, a fault was created between the hills of Rajmahal and the Meghalaya plateau when the Indian plate was moved in the north-east direction. Therefore, the Meghalaya plateau is further divided into Garo Hills, Khasi Hills and Jaintia hills due to the formation of faults. However, this region has its economic significance due to the availability of mineral resources. For example, coal, iron ore, Sillimanite, limestone and Uranium. During the south-west monsoon, this region receives the maximum rainfall.

The western coastal plain is a narrow belt. They are an example of submerged coastal plains which are marked by ports and harbours. Due to the absence of deltas, they provide a natural condition for the development of ports. For instance, Kandla port, Mazagaon port, Jawaharlal Nehru port, Marmagao port, Mangalore port, Cochin port, etc. Geographically, the western coastal plains are located between the Gujarat coast in the north and Kerala coast in the south. They are marked by backwater called ‘kayals’, which attracts both tourism and fishing sector. They can be further divided into the following divisions.

Read more: What are coral reefs?

Read a complete article on coral reefs, their types, formation etc. at above link.

Important peaks of Andaman and Nicobar

The Islands of Arabian Sea

India and its neighbouring countries

The border between India and China

India shares its border with China about 3488km. Four states and one Union Territory (U.T) shares the border with China namely, Himachal Pradesh, Uttrakhand, Sikkim, Arunachal Pradesh, and Ladakh (U.T). Due to rugged topography and harsh climate prohibited the demarcation of the boundary on the ground. In 1962, China launched a full-scale war against India and captured a large part of India. Thus, the myth of Himalayas as a potent barrier was broken.

The Sino-Indian boundary can be divided into three sectors

The Indo-Pak border and related issue

The Indo-Pak border is the product of partition of the sub-continent in 1947 under the Redcliff Award. It starts from the marshy Rann of Kuchchh in Gujarat and traverses through the sandy desert of Rajasthan, fertile plains of Punjab and hills and mountains of J&K. The following are the major zones of contention between India and Pakistan.

The union territories of Jammu and Ladakh shares common border with China, Pakistan and Afghanistan. Pakistan claims to Kashmir are largely based on religious and economic consideration. The 1949 ceasefire line has been adjusted as LOC (Line of Control) under Shimla agreement. This has finally considered the defacto boundary between India and Pakistan. At present, this is the highly contagious zone between India and Pakistan.

The Siachen glacier is about 75 km long and 2 to 8 km in width. This is the largest glacier outside the polar and sub-polar region. The Karakoram highway between China and Pakistan is very close to the glacier. Hence, the Siachen glacier has great strategic importance.

The Sir-creek forms the boundary between the Gujarat state of India and the Sind province of Pakistan. This creek is rich in marine life and both the countries desire to include it in their respective territories. While India claims that the middle point of Sir-creek should be demarcated as the international boundary, Pakistan wants the eastern bank of the creek as the border between India and Pakistan.

The Indo-Bangladesh border and related issue

India shares the longest border with Bangladesh stretching 4096km, which accounts for nearly 27% of the total land border of the country. As many as five Indian states share the international boundary with Bangladesh. They are West Bengal, Assam, Meghalaya, Tripura and Mizoram. The boundary has been determined under the Redcliff Award, which divided the erstwhile province of Bengal into two parts. The eastern part became Bangladesh in 1971 and the western parts as West Bengal.

There have been 4 areas of overlapping claims as following.

The India-Nepal border and related issue

India’s border with is about 1752km, five states of India namely Uttrakhand, Uttar Pradesh, Bihar, West Bengal and Sikkim touch the border of Nepal. India-Nepal border mainly runs in a west-east direction almost along the foothills of the Shiwalik range. The present boundary between Nepal is the boundary demarcated in 1858.

India’s friendly relations with Bhutan are based on the treaty of 1949, which provides a sound framework to ensure “perpetual peace and friendship”. Under the treaty, India has got the rights to protect Bhutan’s sovereignty and defend its borders. Indian army units are permanently stationed all along the Bhutan-Tibet border.

The India-Myanmar border and related issue

The boundary between India and Myanmar is 1458km long which runs from India-China-Myanmar trijunction in the north to the southern tip of Mizoram. This boundary roughly runs along the watershed between the Brahmaputra and Irrawaddy. This border runs through the thick forest hills along the borders of Mizoram, Manipur, Nagaland and Arunachal Pradesh.

Which is the highest peak of Peninsular Plateau?

The Tropic of Cancer (23½⁰N) divides India into two halves.

Name the channel which separates Sri Lanka from India?

A narrow channel of sea formed by the Palk Strait and Gulf of Mannar separates Sri Lanka from India.

How many states India have? 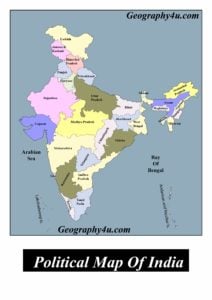 How many zones India have?

What are the neighbouring countries of India?

Which is the second largest river basin in India?

Godavari River Basin is the second-largest basin of India, covering 10% of geographical the area of India.

Which is the largest river basin of southern India?

What are the Union Territories of India?

Name the states of India which share the boundaries with Bangladesh?

Name the Indian states which share their boundaries with Nepal?

There are five Indian states which share their boundary with India as follows.
Uttrakhand.
Uttar Pradesh.
Bihar.
West Bengal.
Sikkim.